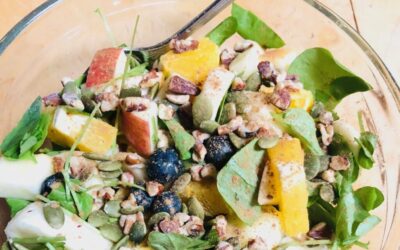 Fight the flames of inflammation and chronic disease using the power of food—Here’s how.

You’ve probably heard of inflammation. It’s described as a “fire” that’s happening inside your body that can – when it goes on for too long (is chronic) in too big of an area of your body (widespread) – damage your health. Inflammation is involved in several chronic diseases, including diabetes, heart disease, atherosclerosis, and even some neurological issues like depression and Alzheimer’s.

Inflammation can damage normal, healthy tissues and cells. This damage then paves the way for more damage and, eventually, disease.

That’s why we want to reduce chronic, widespread inflammation for better health. A recent study published in the journal Nutrition Reviews looked at several studies to better understand the link between inflammation and what we eat.

How do we measure inflammation?

A biomarker (biological marker) is something you can measure with a medical test that is a known link to a disease. Biomarkers alone usually aren’t enough to diagnose a disease, but they’re a measure of how likely you are to get that disease. In other words, your risks of getting the disease.

There are several inflammatory biomarkers that can be measured. This study looked at two that aren’t that commonly used: platelet-activating factor (PAF) and lipoprotein-associated phospholipase A2 (Lp-PLA2). In this study, researchers looked at the link between what people ate and how high these two biomarkers for inflammation were.

High levels of PAF are linked with several inflammatory processes. PAF contributes to harmful free-radical oxidation and can trigger the release of other, more well-known inflammatory markers, like IL-6 (interleukin-6), IL-8 (interleukin-8), and TNF-⍺ (tumour-necrosis factor-alpha). According to the study authors, “patients with diabetes, heart failure, acute myocardial infarction, and coronary heart disease have elevated levels of PAF.”

This means that you should aim for low levels of inflammatory PAF in the blood to try to reduce risk of disease.

Lp-PLA2, on the other hand, has some anti-inflammatory function, however, it’s most often considered to be inflammatory. Like PAF, you want to aim for low levels of Lp-PLA2 in the blood to try to reduce risk of disease.

Yes, what you eat affects your inflammation levels

In this study, the researchers reviewed 16 clinical studies from around the world to figure out what dietary patterns tend to impact levels of PAF and Lp-PLA2, and they found a trend.

Which diets are “anti-inflammatory” (i.e., better for health)?

The “anti-inflammatory” diets linked with lower levels of PAF and Lp-PLA2 are:

The good news is that you can start today! Several of these studies showed that changing your diet can change your levels of inflammation. For example, when healthy people ate a Mediterranean dietary pattern, they had reduced levels of PAF in their blood. And it can even help if you already have a condition linked to high inflammation, like type 2 diabetes. A study of people with diabetes showed that when they started eating a more Mediterranean or plant focused diet, their levels of inflammation dropped even more than those without it.

When it comes to vegetarian diets, we already know that too much red and processed meats contribute to harmful inflammation. Plus, eating more plants and less processed foods has benefits for heart health. The studies reviewed here confirm that people who don’t eat meat tend to have lower levels of inflammatory Lp-PLA2 than people who do eat meat.

Some studies had participants start eating a “heart healthy” diet. This means that they replaced some of the refined grains with whole grains and increased the number of vegetables and legumes that people ate. They found reductions in Lp-PLA2 levels after 12 weeks. And when the dietary change was accompanied by physical activity, these beneficial changes were seen after just 3 weeks.

You may be wondering which diets are associated with higher levels of inflammation. (And you probably won’t be surprised.)

The diets linked with higher levels of inflammation were the “western” diets. These are ones that include foods that are more highly processed, like carbonated drinks, fast foods, and salty snacks and higher meat and dairy consumption. Unsurprisingly, the “western” diet is also linked with a higher risk of heart disease.

How can food impact your body’s levels of inflammation?

There are lots of ways that certain foods and dietary patterns help to reduce inflammation.

For example, we know that eating more fruits and vegetables reduces some measures of inflammation and is linked with better heart health. Research also shows that some of the bioactive compounds in traditional Mediterranean diet foods naturally inhibit inflammatory PAF by blocking some of the inflammatory processes.

The researchers say, “a range of well-established, healthier dietary patterns may lower inflammation.” These include eating a more Mediterranean, vegetarian, and/or a “heart healthy” diet. What do these dietary patterns have in common? Try:

Contact me to connect if you have questions about incorporating more plant-based foods into your meal planning or if you need guidance around food sensitivities.